For simulations to be meaningful, it is necessary to define models for both virtual agents and their environment. Thus far, much attention has been given to the definition of models for agents (e.g., behavior, decision-making and interaction models), while little has been done in defining virtual environments that mimic the complexity of real-world environments.

We define an agent as a software entity that is driven by a set of tendencies in the form of individual objectives and is capable of communicating, collaborating, coordinating and negotiating with other agents. Each agent possesses resources of its own, executes in an environment that is perceived through sensors, possesses skills and can offer services.

The task module manages the specification of the atomic tasks that the agent can perform in the domain in which it is deployed (e.g., walking, carrying, etc.).

We subscribe to the idea that a virtual environment plays a critical role in a simulation and as such, should be treated as a first-class entity in simulation design. In DIVAs virtual agents and environment are fully decoupled.

Inaccessible: virtual agents situated in these environments do not have access to global environmental knowledge but perceive their surroundings through sensors (e.g., vision, auditory, olfactory);

Non-deterministic: the effect of an action or event on the environment is not known with certainty in advance;

Dynamic: the environment constantly undergoes changes as a result of agent actions or external events;

Continuous: the environment states are not enumerable.

We achieve the simulation of openness by: 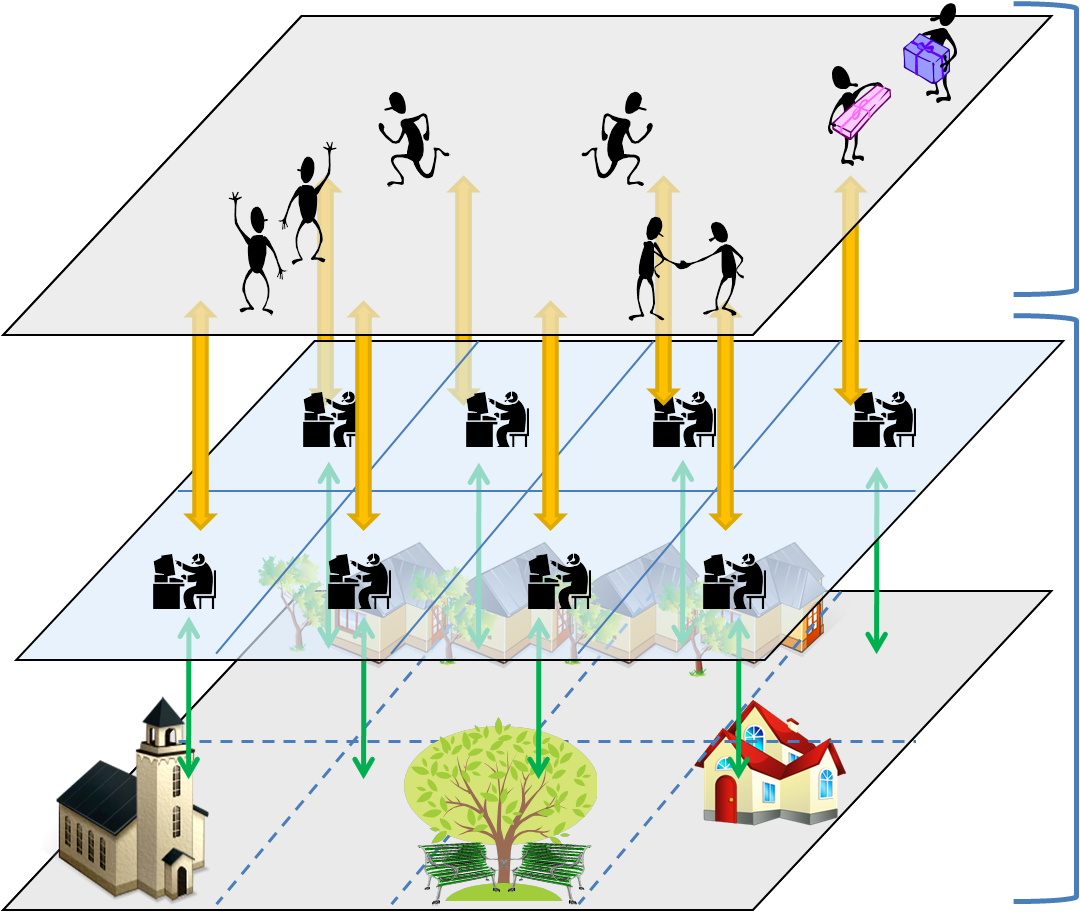 A cell controller does not correspond to a real-world concept but is defined for simulation engineering purposes. It is responsible for:

The cell controller architecture consists of an interaction module, an information module, a task module, and a planning and control module. 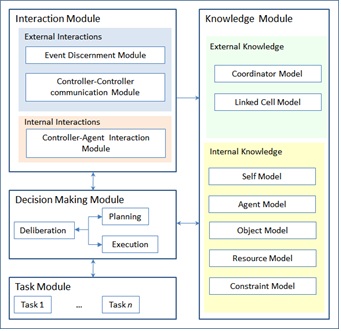 The Knowledge Module contains the data a controller needs to function. It is composed of external and internal knowledge modules

The Linked Cell Model maintains a list of neighboring cells, that is, those which share a border with the cell. The cell controller uses this information to handle events that occur near boundaries and potentially affect adjacent cells.

The Self Model contains information about the controller (e.g., id) as well as the essential characteristics of the cell assigned to the controller such as its identifier and region boundaries.

The Agent Model contains minimal information, such as identification and location, about the agents within the cell’s environment region.

The Object Model includes information detailing physical entities that are situated within the cell region but are not actual agents (e.g., barricades, buildings, road signs).

The Resource Model contains information about the resources available for the controller.

The Constraint Model defines the specific properties and laws of the environment.

The Task Module manages the specification of the atomic tasks that the controller can perform.

The Planning and Control Module serves as the brain of the controller. It uses information provided by the other modules to plan, initiate tasks and make decisions.

Context-aware agents must be constantly informed about changes in their own state and the state of their surroundings. Similarly, the environment must react to influences imposed upon it by virtual agents and users outside of the simulation.

This model is driven by continuous time ticks. At every tick, when agents execute actions, they produce stimuli that are synchronously communicated to their cell controller (i.e., the cell controller managing the cell in which the agent is situated). Cell controllers interpret and combine these agent stimuli as well as any external stimuli triggered by the user of the simulation. Once cell controllers determine the total influence of the stimuli, they update the state of their cells. Every cell controller publishes their new state to agents located within their cell boundaries. Upon receiving the updated state of the environment, agents perceive the environment, memorize the perceived information and decide how to act. The cycle repeats when the next tick occurs.