The unique characteristics of MATISSE are:

At a high level, Matisse contains several subsystems. Its main constituent is the Simulation Module which consists of three subsystems. 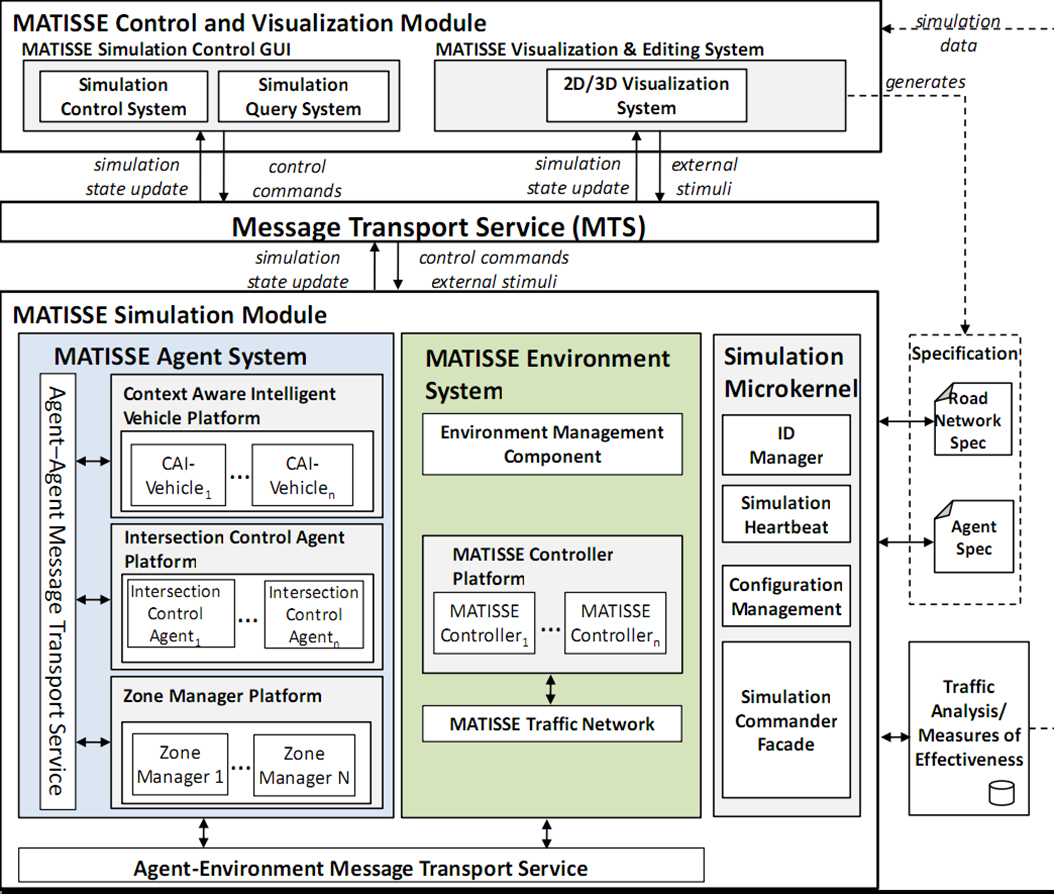 In MATISSE, a trafﬁc network is represented as a directed graph. Directed edges in the graph represent road segments, and nodes represent intersections or connections between consecutive road segments. A lane connection speciﬁes how lanes in the upstream road are connected to lanes downstream. In other words, it deﬁnes the possible trafﬁc movement between lanes in two consecutive roads.

Figure (a) shows an example of a directed graph that represents a trafﬁc network. In the illustrated example, node N2 is an intersection node, while other nodes are connection nodes used to connect road segments. Figure (b) illustrates the trafﬁc network after specifying detailed road attributes.

In MATISSE, a vehicle agent can be set to simulate:

MATISSE 3.0 offers algorithms and their implementations for both vehicle dynamics and travel route planning.

A simulated driver perceives its environment through vision and auditory sensors. The vision sensor allows the simulated driver to “see” the portion of the environment located within the driver’s vision scope. This perception is taken into account in the decision-making process. For example, if a driver sees a leading vehicle decelerate, s/he may decide to decelerate in order to avoid collision. On the other hand, the auditory sensor allows the simulated driver to hear audible events (e.g., sirens) that propagate to the driver’s auditory perception range.

A simulated driver is assigned one of five levels of distraction: level 1: sober; level 5: impaired. The higher the level of distraction, the less the driver is able to perceive its surroundings. 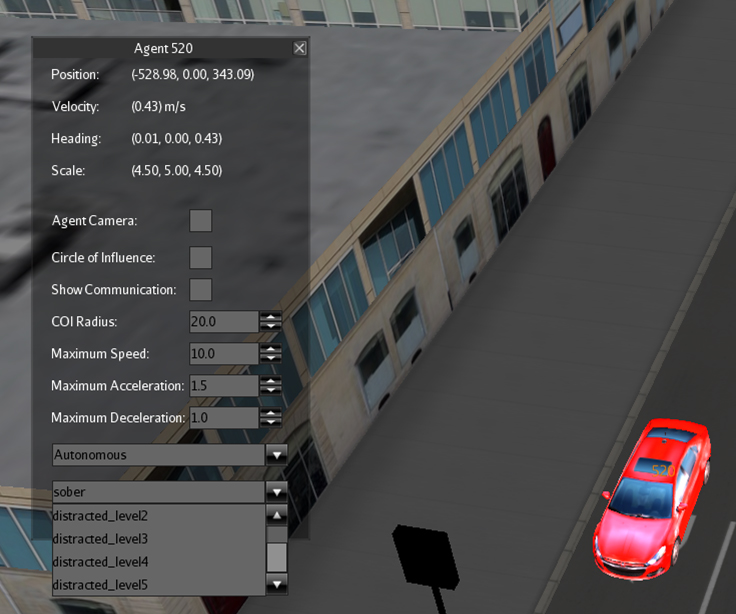 A driver’s level of distraction can be modified at run-time.

Microscopic simulation systems account for vehicle dynamics through the implementation of car-following and lane-changing models. Car-following refers to a vehicle’s acceleration and deceleration in relation to the positions and velocities of its neighboring vehicles. Lane-changing model describes the driver’s decision to move to a neighboring lane.

MATISSE offers an improved version of the Krauss model:

During the execution of the simulation, vehicle agents are given a destination to reach. They execute a non-trivial dynamic routing algorithm. At each simulation cycle, the vehicle agent checks if its current goal has to change (e.g., due to an emergency notification) and re-plans its travel route if necessary. The planned route represents the optimal route computed based on the traffic conditions at planning time. Following this step, the vehicle agent assesses its ability to execute its current plan based on current traffic conditions (e.g., does the lane occupied by the vehicle lead to the next road in the planned travel route? Is a lane change possible?). If the plan is not achievable, the vehicle agent deliberates and either defines an alternate travel route or executes an action (e.g., reduce speed).

The simulation of unexpected accidents is realized through the modification of the collision-free Krauss model and the definition of algorithms that take into account the driver’s perception in the driver’s decision making process.

In MATISSE, during the execution of the simulation, the user can modify the level of distraction of a driver. The higher the level of distraction, the less the driver is able to perceive its surroundings. The simulated drivers do not control the outcome of their actions. Rather, the environment decides the results of the drivers’ actions according to the environment’s physical laws. For example, in the case of a distracted driver who speeds up unexpectedly in a jammed traffic, the environment computes the outcome of this action (i.e., accident) based on the current traffic conditions and the environment’s physical laws.   The result of this computation is not predeﬁned, but determined based on the physical settings (position of the surrounding vehicles at collision time, speed, heading, mass). In addition, the environment updates the state of the colliding vehicles (e.g., to indicate their inability to move during the next simulation cycles). 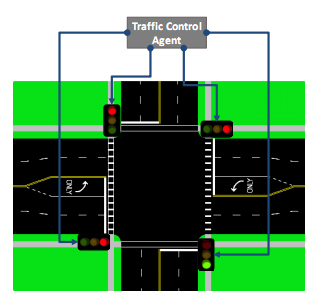 An intelligent traffic management system involves a large amount of interactions and collaborative decision-making among various agents. As such, supporting communication capabilities is fundamental to the implementation and validation of a simulated ITS. MATISSE provides mechanisms for the simulation of V2V, V2I and I2I communications.

In addition, vehicle agents and intersection controller agents can communicate with their service managers to exchange information about the traffic environment.

Mohammad Al-Zinati and Rym Wenkstern. An agent-based self-organizing traffic environment for urban evacuations. In Proceedings of the The Sixteenth International Conference on Autonomous Agent and Multiagent Systems, AAMAS ‘2017, Sao Paulo, Brazil, May 2017.

Mohammad Al-Zinati and Rym Wenkstern. A self-organizing virtual environment for agent-based simulations. In Proceedings of the 2015 international conference on autonomous agents and multiagent systems, AAMAS ’15, pages 1031-1039, Istanbul, Turkey, May 2015.