The purpose of this project is to deﬁne and evaluate collaborative agent-based algorithms in the context of an Agent-based Intelligent Transportation Systems (ATS).

In the transportation field, various models have been deﬁned in the context of urban evacuation. These models are based on the deﬁnition of a trafﬁc strategy then its execution. The main drawback of these models is that they do not account for the dynamic nature of real-world traffic networks.

Our research improves the state-of-the-art by proposing agent-based self-organizing algorithms for traffic network operations that considers current traffic conditions.
Traffic re-organization refers to the modiﬁcation of the traffic network topology to better utilize an existing network capacity. This is commonly achieved by applying a combination of road reversal and crossing elimination operations.

The traffic manager executes a three-step plan to re-organize the traffic environment in an effort to maximize the evacuation effort. Based on the information exchanged with the intersection controller agents, the traffic manager determines the next set of roads to be reversed. Before reversing the directions, it is necessary to empty roads from traffic and prevent new traffic from entering. This responsibility is delegated to intersection controller agents who adapt their traffic control strategies to minimize the time required to clear the roads marked for reversal. Once the roads are empty from traffic, road reversal operations are performed.

Network after the Identification of Roads to be Reversed 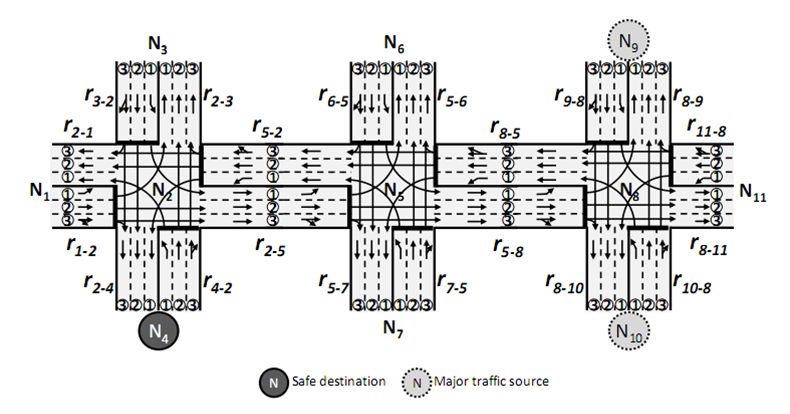 Network after Planning for Safe Reversal

Network after Road Reversal is Applied